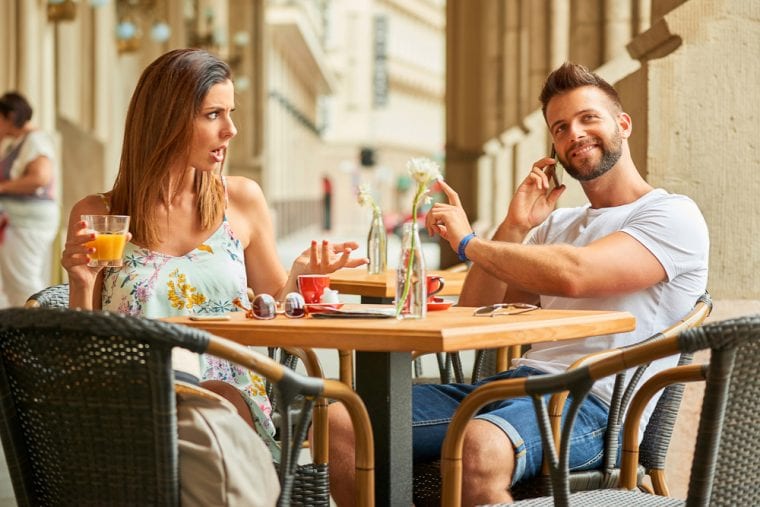 There are some valid reasons why a Pisces man would ignore you. Pisces man gone silent makes you pause. What happened? What did you do and how can you fix it? Pisces silent treatment happens for a reason.

There are solutions! It’s alright if you aren’t Merlin the magician. Just be yourself with a few little tweaks. Decode him right now so keep reading to learn what it means when a Pisces man ignores you. The Pisces man silent treatment isn’t fun in the least.

Hasn’t Fully Opened Up To You Yet

One of the biggest reasons a Pisces man would ignore you or pull back which makes him seem as though he’s blowing you off is when he isn’t really ready to talk to you about his personal life.

This would mean that he has things going on in his world that he isn’t going to talk about quite yet. If he’s not fully comfortable with you, he’s going to be a Pisces man gone silent.

This doesn’t always mean he’s upset with you either. He could be totally disturbed by other things going on in his life and he doesn’t know how to cope with it so he just shuts down. Pisces silent treatment becomes common.

Pisces man silent treatment will accompany a shut down from everyone. He will go home and stay there or in his room and lock himself up for a day or two so that he can gather his thoughts or feelings about what is going on.

Sometimes he’s overloaded with feelings from other people as well. Remember that he’s an empathetic guy and often picks up on other people’s emotions or energies which blend with his and make things very confusing.

When the Pisces man is totally comfortable with you and feels he can trust you, he may be more able to tell you when things are “off” in his life and when he just needs a little down time to recover.

You Pissed Him off or Hurt Him

Clearly if you hurt the Pisces man’s feelings or do something that really pisses him off then yes, he will withdraw and possibly give you the silent treatment. It’s not right and it’s not mature but he’s a feeler. He operates on his knee jerk reactions.

He has to learn how to open up and communicate properly instead of shutting himself down. He doesn’t realize that problems will not get solved if he doesn’t actually express what he’s upset about. When a Pisces man goes quiet, it’s an issue.

How can you fix anything if you don’t know what it is that you did wrong or what you did that hurt him? When you notice Pisces man silent treatment you can help by perhaps letting him know that you’re actually concerned, he’ll remember that he really should actually tell you what he’s feeling. This will alleviate confusion and possibly make him come back around quicker.

If he’s a young Pisces man, he’s going to have even more difficulty understanding how to open up and communicate. He hasn’t developed the skills to talk things through yet and responds only to his feelings.

The more mature he becomes, the more he begins to realize through experience that it’s often better to speak up instead of holding it in. The older Pisces man may actually say too much at times.

Again, reach out to him and let him know that you are sorry that you hurt him or ticked him off. Ask what it was in specific and try to understand the Pisces man gone silent.

So when you ask yourself “Pisces man ignoring me is happening, what do I do?”. Remember that the Pisces man silent treatment is something he’s very used to doing.

May Feel Smothered or Overwhelmed

The Pisces man loves lots of attention and affection but he has limits. Pisces man gone silent?  There are some reasons you probably need to be aware of so that you can avoid it.

He can become too intertwined with his partner which causes him to be off kilter and can lead to depression. In fact, Pisces men are prone to mental illness and addiction. When Pisces man goes quiet, it means they should really learn coping skills when it comes to letting their emotions out.

If you really watch for the signs, you can just about tell when your Pisces guy is near a breaking point. When a Pisces goes silent, something is definitely up with him.

He will also start reacting if you’re spending too much time together. Even if he loves you, at some point his emotions become overwhelmed and he will want some time by himself.

It’s alright to let him have some free time and space. He won’t leave. In fact he’ll really appreciate it if you let him have time on his own. It’s ideal for you to make your own plans away from him once in a while.

I’m not saying this has to happen often but I’d say at least once a week would be something that allows him to be himself, be by himself, and figure it out when a Pisces goes silent.

If you don’t allow him to have this time and space, he will start to resent you and that upset will build until he takes the time he wants without your say so. He will just go dead quiet and you’ll have a hard time getting him to respond.

The best thing is to always be up front with him about your feelings and ask him about his. He may be afraid to tell you that he needs space or that he has some issues going on in his life.

When you open up to him and ask him to do the same, he may actually get comfortable then this disappearing thing may happen substantially less if at all. Give it a chance and be an open book with him.

When a Pisces goes quiet, it’s because he needs to really contemplate things and review everything in order to get a feel on what he can or will do. It will greatly depend on how you respond to him.

Always give him a bit of space but still effectively show you care by trying to find middle ground so that incidents like this don’t happen more.  The Pisces man silent treatment can really suck but it doesn’t have to for the long haul.

Remember, he is still a ma first and foremost. Who knows what he has on his platter at any given time. Be there for him and be sure that you’re letting him know you’re not going to abandon him even if he does get upset.

Also when a Pisces goes silent, inspire him to talk about what he feels or at least being honest with you about him feeling unsettled no matter what it is. Pisces man gone silent is unnerving and makes you wonder if you’ll ever get through.

If you want to better understand what does it mean when a Pisces man goes silent, and what can you do about it? click here and find out everything about your special Pisces guy.

One last thing, as appealing as Pisces can be and also frustrating, they are emotionally driven and sometimes sweetness can be of use. Speaking of sweet, did you know that adorable actor Corbin Bleu is a Pisces man? Wow!

Are you having problems with a Pisces man gone silent? Tell me all about your situation below!

17 thoughts on “Pisces Man Silent Treatment – What Does it Mean?”