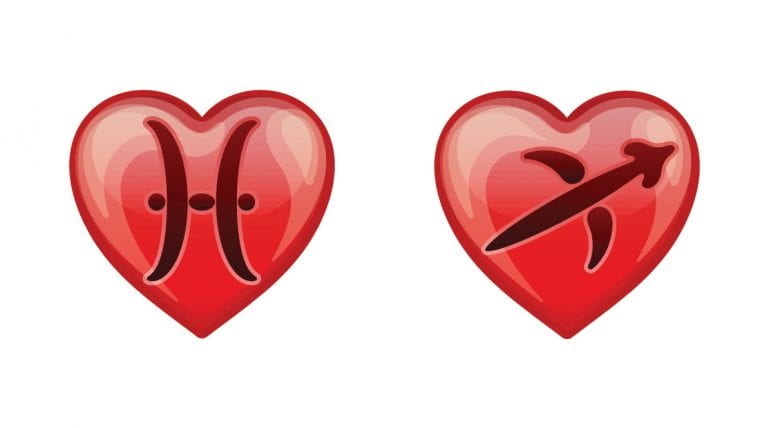 With Pisces man being a water sign and Sagittarius being fire, there is the chance that the Pisces man could put out his lover’s flame. However, he could also help balance her more and allow her to simmer down a bit. He could be a cool change that she’s looking for.

The Sagittarius woman would love to have a man give her everything she’s ever craved. However, she may not appreciate his needy behavior at times. She’s one for personal freedom and is a bit of a free bird.

Pisces man may make her feel she has to stay put and thus could form resentment. Keep reading for what these two may be like as it could go either way with Pisces man and Sagittarius woman.

As I mentioned there are good things with the Pisces man and Sagittarius woman match up and there are some things that could cause great distress to this romance.

They’re very attracted to each other from the get go because both of them have natural appeal. They have the ability to draw in anyone they are really feeling a vibration with.

Sagittarius woman is typically an empathic person and sometimes even rather psychic just like the Pisces man. She may not always trust her intuition and this is where she gets herself into turmoil.

Pisces man is a cool drink of water for her adventurer heart and for him, she is a fresh warm breeze to heat his life up. They can either complement each other to balance or they could cause each other grief.

At the start, they feel as though they’ve always known each other which bring them a comfort very quickly between each other. They probably have a lot in common as far as interests.

Sagittarius Woman, Who She Is

The Sagittarius woman is independent, intelligent, optimistic, objective, seeker of justice, and loves to live life by the seat of her pants. She’s always ready for that next trip or move.

She is a woman who has a hard time sitting still for too long without becoming bored. She will do everything she can to keep herself busy much like the Gemini woman.

The thing is though, Sagittarius woman never gets to the point where she will be bored because she finds interest in many things and makes her very diverse in her life.

When Sagittarius woman meets a Pisces man, she can relate to his dreamy ideals about life. They connect via their dreams and aspirations. They are physically attracted to each other and are practical with each other.

Sagittarius woman is enamored with her Pisces man until she feels he’s trying to keep her tied down to him and whatever town they may be living in at the time.

She loves to travel and move around where Pisces man is more stay in one place type of guy.  The two have to find a common ground so that they can be open to each other’s differences.

The Pisces man is passionate, romantic, and dreams of wondrous life he could have if he could only find a way to make it happen.  He is capable and he’ll be very successful when he takes steps toward his goals.

Pisces man makes most of his choices out of what he feels. He may not always apply logic where it should be which can cause him to get himself into some precarious situations.

He seeks out the love of his life so that he can spend his life worshipping her. He wants someone who is his equal and who will feel what he needs or wants from her without having to tell her.

When the Pisces man meets the Sagittarius woman, he is floored by her common ground with him. They seem to have much of the same interests which makes them easily able to form a quick bond.

He will be sexually attracted to her willingness to open up to him. However, he may take issue with her desire to do things differently than he really likes to do it. This could cause friction. He won’t like that she wants to get out or travel a lot either.

What Works Between Pisces Man and Sagittarius Woman

Can the Pisces man and Sagittarius woman soul mate relationship be possible? Yes! They do seem to have enough in common that they can absolutely make a long term relationship out with it.

The Pisces man and Sagittarius woman marriage is also possible. I won’t say it’s likely though as they do have things between them that they would have to work through before they decide to take nuptials.

I’ve mentioned that they likely have a whole lot of activities, food, music, etc that they seem to enjoy together. They’ll never lack for anything to do. They always have something that they can agree on to be active with and have fun.

Their life values are very similar but not exact. This is two human beings though so there is no way to have everything in common. For the most part however, they do seem to see life the same way.

They are likely to have very intellectual conversations that keep them stimulated for hours. Whether they are out on a boat or at home in front of the fire place, they’ll always have something intriguing to discuss.

Finding the things they agree on are best for them to hold onto when they’re trying to deal with the things that likely don’t work well between them. They have to remember why they’re together and why they could work out if they try.

These two have the capacity to fall very much in love and may do so very quickly. Later on they may fizzle out though if they don’t take some action on what doesn’t gel well between the two.

What Pisces Man Thinks of Sagittarius Woman, Especially in Bed

Pisces man may not like his Sagittarius woman being so blunt as to tell him what he needs to do instead of what he’s already doing. He’ll be hurt or angry by it. This will make him not want to have sex with her as often.

Pisces man thinks his Sagittarius woman is beautiful, intelligent, and has the capacity to bring great success into her life. He knows she’s someone who makes a best friend.

He doesn’t seem to trust her though as she can come across as flaky at times. She doesn’t mean to be but she likes to get out and about to do things on her own. She loves her independence and she loves to have a good time.

Her idea of a good time isn’t always what a Pisces man is comfortable with. He’s not nearly as social as she is and he sure doesn’t want to travel as much as she does. This makes him feel that maybe she doesn’t love him enough to calm down.

The Pisces man loves his Sagittarius woman but wishes she’d stay home with him more or do activities with him. He also wishes she’d give in to his sexual desires instead of trying to tell him what to do or not do.

Ultimately the Pisces man becomes confused and unsure if this is the relationship he wants to make last for a life time. There is hope but there is also a lot to learn from each other. He may not want to make the effort.

Sagittarius woman may also omit things where talking to her Pisces man is concerned. This makes Pisces man suspicious of her. He knows how much she likes to spend time without him and wonders if she’s getting attention from another man.

Both of these people are suspicious of their partner’s behavior. They are both fearful that the other is cheating or planning to exit without any notice. Sagittarius woman may disappear on her Pisces man if she feels it’s over.

Another area where they struggle is one I’ve mentioned previously. Sex is likely to be a difficult are between them. Sagittarius woman often will say what is on her mind and if her Pisces man is doing something she doesn’t like, she’ll tell him.

She’ll ask him what he wants and he’ll be frustrated that she asked because she should already know somehow without him saying a thing. She knows that’s not practical and so they bump heads. Sex is probably not very satisfactory between them.

Where these two connect easily on things they both enjoy, they will not emotionally connect as well as they’d like. Pisces man wants everything they do to be a spiritual experience.

Sagittarius woman wants to just live life, be spontaneous, and not think too deeply about things unless it’s absolutely necessary. She won’t want to talk about her feelings that often whereas he will be willing to pour his out.

This breakup can go either way much like the relationship could go. Either they can be amicable and decide they are better off as friends or the Pisces man could get very emotionally torn up about a break.

Sagittarius woman is likely to tell the Pisces man what she finds weak about the relationship, why she wants to move on, and that she wants a different life. Then again, if she thinks he’ll react badly, she may just pack up and leave with no word.

Sagittarius is a traveling lady and it takes a spectacular man to grab hold of her and convince her to settle down. Pisces man could do this but he’s so emotionally driven that he doesn’t see the logic that she does.

These two can make beautiful friends since they do share a lot in common. As lover though, they tend to fall short and unless they can live with being companions without steamy sex then they will likely just stay friends.

Are they likely to get back together? Probably not. They just don’t do well in a relationship setting. If they do, they have to learn to communicate properly and find middle ground in order to make it last.

The Pisces man and Sagittarius relationship is not one of the best. It’s not one of the worst either. It can swing either direction depending on where they are in maturity and what they want in life.

On a scale of 1 to 10, I give this couple a 5. They can work at it if they really do fall in love. It won’t be easy but it won’t be that hard either. It’s a matter of decision for them both.

If they are both comfortable then they can marry and thus making the Pisces man and Sagittarius woman decent parents if they decide to have children. Sagittarius will be logical and Pisces man will be very loving.

They would make a welcome balance that is needed for raising children together. These two have to make sure that their love is ready to stand the test of time before they start thinking about children, however.

Sagittarius woman will not want to be tied down if she senses instability with her partner. Pisces man can raise children on his own and be very efficient at it but why do it alone?

This is a couple that has the capacity to make it but they have to both really want it.