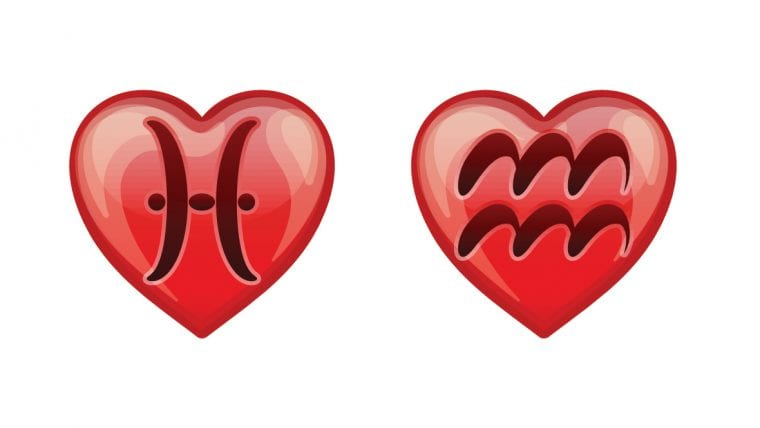 Pisces man is a water sign while the Aquarius woman is an air sign. The Aquarius woman can cause some ripples or even waves in the Pisces normally tranquil waters. This match up could be rather chaotic or it could work out. It’s rather a tossup dependent on their individual decisions.

These two don’t really understand each other very well. However, they are both dreamers and tend to think outside of the box. Perhaps they can use some of this technique when it comes to love. Keep reading for more details on what this match up looks like.

The Pisces man and Aquarius woman soul mate relationship isn’t on the highly likely scale. They can form a bond that could possibly last but it will be work on both of their parts and whether or not they want to do it is up in the air.

If these two actually do meet, Pisces man will be attracted to the confidence that Aquarius woman has in herself. He finds her very appealing and will want to talk to her and get to know her.

Aquarius woman will find Pisces man’s sex appeal quite a draw for her. She will want to see what he’s all about and if she’s someone she can see herself physically intertwining with in the future.

They’re both lured by fantasy. Aquarius woman may be a bit more into her personal freedom though and Pisces man will have to work hard to get her to commit to him.

If he is successful, the two will have to work out the bugs in their relationship to make it last. Will they want to is more of what they have to consider when figuring out if they want it to be forever or not.

The Pisces man and Aquarius woman marriage isn’t high up on the priority list. It’s possible down the line once they’ve figured out how to create a strong bond otherwise, it’s on the back burner for these two.

Aquarius Woman, Who She Is

The Aquarius woman is strong, independent, blunt in what she says, tells the truth, and is an adventurer at heart. She is one that will move around to enjoy different places throughout her life.

She also really enjoys travelling and seeing what all is out there. Her heart cannot be pinned down to one location for too terribly long unless she’s quite mature and ready to stay in one spot.

Aquarius woman is logical. She’s not one to be overly emotional but can be hot tempered if her buttons are pushed. She also has the capability to get “on a roll” when she finally does get upset.

This means she has the capacity to hold things in then when the opportunity arises, she will tell the person she’s upset with, everything that is wrong with them and why.

When the Aquarius woman meets the Pisces man, she is definitely sexually attracted to him. It’s quite hard not to be. She will talk to him and realize that she can relate to his dreamer side.

He has some amazing fantasies that she thinks she’d be happy to be part of. She wants to get to know him further and see if there is a possibility between them and find out if he’s worth giving up her free time a bit for.

The Pisces man is a lover, dreamer, romantic, idealist, and is looking to find someone who is not only his soul mate but someone who will help balance him out.

He needs someone to help him ground himself because otherwise he’s going to get so far into his fantasies that he may forget what reality is. His empathy is strong which can hinder his own personal growth worrying about others.

He wants to find a way to succeed in what he dreams about so often. He can easily get discouraged or change his dreams thus not really accomplishing his original goals.

When the Pisces man meets the Aquarius woman, he can sense how grounded and practical she is. She too has great fantasies and dreams but he can see how she actually goes after what she wants.

This inspires him to want to take some action to chase his own dreams. He loves that she’s so independent but at the same time he can be a bit fearful of it. She could decide he’s too clingy and leave.

He sees that to win this woman, he’s going to have to work hard to prove to her that he’s worth her giving up some of her personal freedom for. He may go for it and see if he can’t win her heart.

What Works Between Pisces Man and Aquarius Woman

There are a few things that have the capacity to work well with the Pisces man and Aquarius woman matchup. One of those things is sex. Aquarius woman is adventurous and won’t mind Pisces taking control.

In fact, she’ll find it rather refreshing that she’s not the one who has to bust the moves. However, she’ll also notice he wants to move quickly and she isn’t one to move too fast.

In her youth, Aquarius woman likes to keep her options open and this could make her have a fling or two. When she matures, she begins to realize she prefers an actual companion.

Sex between these two is likely to be quite satisfying. Pisces man feels he’s getting closer to his Aquarius woman and she feels as though sex is fantastic with this dreamy guy with talent.

Pisces man however, could ruin the mood if he lets his emotions get away with him too much thus making sex less fun than what the Aquarius woman wants to have with him.

Trust is another thing between them that may work well. Pisces man doesn’t like to talk about his personal side until he’s comfortable and neither does Aquarius woman.

On that note, they will both wait until they are committed before they start to really opening up. This ability to wait it out for awhile means that each of them is not concerned with trust right out of the gate.

They give each other the benefit of the doubt and keep trying to forge a bond that will be strong. Once they are committed, they will retain the trust they have for one another. Aquarius woman is always truthful when asked a question.

What Pisces Man Thinks of Aquarius Woman, Especially In Bed

The Pisces man thinks the Aquarius woman is very kind, talented, intelligent, and appreciates her capacity for telling the truth. Sometimes he’s hurt by her answers but he’d rather her be honest than not.

He feels that she’s very strong and her love for adventure is quite fun. He doesn’t like that she wants to take off a lot and take trips as much as she does though. He also doesn’t get why she likes to live in different places periodically.

Pisces man doesn’t understand why the Aquarius woman can come off as being rather callous or cold at times. This makes him feel as though maybe she doesn’t care enough or that she isn’t that into him.

He learns quickly though that he should never ask her what she thought of his performance because she will absolutely tell him the truth and he will become hurt or angry.

They dream fantastically together and can make their dreams come true as a couple. However, they will have to work on it quite a bit and Pisces man doesn’t know if she’s worth the work.

Unfortunately as lovely as Pisces man and Aquarius woman could be, they tend to not have a whole lot in common. Their problems are stacked up against them and unless they’re willing to put in the effort, they may fall short of a long lasting love.

Aquarius woman also loves her personal freedom. To give that up, the guy has to really be worth the huge change in her life. She’s not likely to think Pisces man is really someone she can see giving up her free time for unless it’s for sex only.

Aquarius woman won’t have a problem forming a “friends with benefits” situation with the Pisces man if he’s up to it. It’s likely he’ll become too attached and too emotional for her liking though.

While these two may have a few things in common, they really don’t share too many of the same interests. This limits the things they can do together and have a good time.

Aquarius woman rather likes being social and having fun by herself. Pisces man won’t understand this about her and will start looking elsewhere to find someone else who fits his desires in life.

These two really don’t have a whole lot going for them that will favor a long relationship. They’re more likely to be very short lived if they try to actually have love together.

This union would take a whole lot of compromise, changing, and re-arranging and neither are very good at doing that. Aquarius woman wants a man she doesn’t have to change much for. Pisces man wants a more empathetic partner.

I really don’t like saying it but these two have a high likelihood of ending anything that they’ve started. At best, they can be friends. Even then, they don’t relate with each other too terribly much.

They could find a deeper connection if they were willing to sacrifice a little bit and learn to truly open up. However, neither of them are really built to change the fiber of their being.

They can compromise but honestly, they know there is probably someone else out there who is much better suited. Aquarius woman will definitely break up with Pisces man if she knows the connection isn’t enough for her.

In fact, it doesn’t take Aquarius woman very long at all to know if this guy is someone she wants to be with or if she should just move on. Pisces man will take a little longer because he’s a dreamer and holds out hope.

These two are not likely to get back together if they break up. They’re just too different and really don’t balance each other very well either.

While the Pisces man and Aquarius woman may try to form some sort of bond; they’re not a very good match. The possibility is there but it would be a tough road for the two of them.

On that note, on a scale of 1 to 10, I give this couple a 4. That’s being a little generous as I think others would rate them a little lower. I always try to have a bit more hope as I know nothing is impossible.

If these two actually do fall madly in love then their love could help them overcome whatever problems they have. It won’t be an easy path for either of them but it truly depends on how deep the love is.

The Pisces man and Aquarius woman capacity to be parents is there if they want to have children but they must first make their own relationship blossom before they confuse their lives by having kids.

If they do make it to be parents, they’ll actually do quite well with showing the children a nice balance of life. They will show them the importance of dreaming, working, being an upstanding human being, and learning how to work well with others.