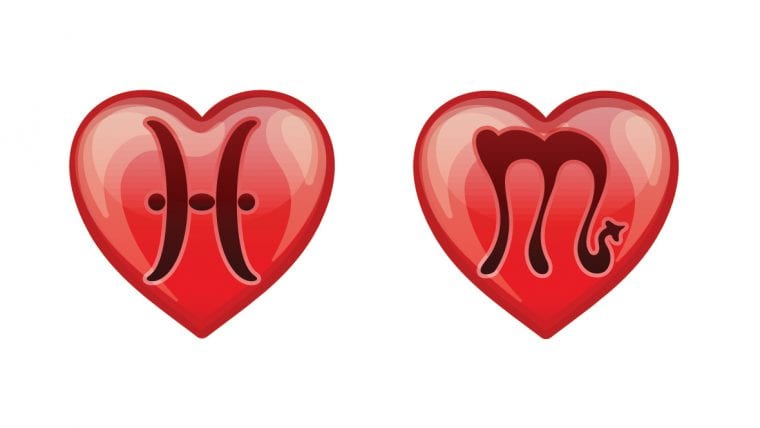 The Pisces man and Scorpio woman soul mate relationship is not only likely but probable. These two really “get” each other and certainly have water in common as their element. They connect emotionally very well and have the capacity of becoming a great love.

They likely have a lot of activities and life views in common so it makes it easy for them to connect and become something very special. In fact, the Pisces man with Scorpio woman marriage is something to behold. Keep reading for more information on these two and what they are likely to be like.

Since both the Pisces man and Scorpio woman are both emotionally driven people, they tend to get each other as no one else is able to. They think and make decisions via what they feel. They also are both quite intuitive.

When you take two intuitive people, you get truth, you get honesty, you get excellent communication, and two people who are passionate about each other in a way that most others may not be.

This intuition of them tells Pisces man that this Scorpio woman is something to behold. Scorpio woman will feel the exact same way. Their first kiss is quite explosive in a wonderful way.

They have chemistry that is quite amazing. They connect in a way that others would be rather in awe of or even jealous really. Scorpio woman will behold her Pisces man as though he’s a king. He will regard her as his queen.

These two have so much in common they cannot even believe it themselves at times. They probably love the same music, movies, and other shared activities. They will never be bored with one another.

There is one area that they have to work at but they love each other so much that it shouldn’t be too problematic. I’ll get into that when I discuss the problems that they have between them.

Scorpio Woman, Who She Is

The Scorpio woman is highly passionate about everything in her life. She feels with great depth. She’s intelligent, she’s successful, she’s talented, and she always does her very best at everything she does.

The Scorpio woman is always seeking the man that will rock her world, sweep her off her feet, and be her lifetime partner. She needs a man that is somewhat grounded yet sparkly eyed.

She wants a man who is beautiful inside and out. He has to be able to take care of her on a deep emotional level because she has a hard time coping with her own emotions.

When the Scorpio woman meets the Pisces man, she can already tell that this guy is different from all the others. He dreams a lot like she does, he senses what she needs, and somehow he understands her without saying much at all.

He makes her quiver with anticipation with every moment she’s going to spend with him. When he finally kisses her, the earth seems to stop all movement. She melts into herself and feels that she’s finally found her soul mate.

That being said, the Pisces man and Scorpio woman soul mate relationship is definitely possible with these two. It’s also very likely to happen. Unless trust becomes too much of an issue, these two will live a dreamy life together.

The Pisces man is very deep, intellectual, spiritual, and passionate. He lives his life based on how he feels and what he dreams will make him ultimately happy. He works hard when he is on the right track.

He’ll be very successful with whatever type of work he decides to do and will be equally successful at accomplishing his dreams. He often will be more successful later on in life when he’s matured and knows what he can do to live his dream.

Pisces man craves the right woman to give all his devotion and love to. He isn’t too much interested in flings though he may occasionally delve into it when he’s younger just for experience sake.

When the Pisces man meets the Scorpio woman, he feels he has absolutely hit the jackpot. He thinks she’s absolutely perfect and will fall for her very quickly. If he’s still young, this may scare him.

If he’s matured, he will dive in and give her the world. The chemistry he feels with the Scorpio woman is unmatched and something that he can see lasting a lifetime. He will be so in love that he’ll do just about anything for her.

What Works Between Pisces man and Scorpio Woman

I would rather say, what doesn’t work because honestly, these two are amazing for each other. Pisces man and Scorpio woman match is something to behold for a lifetime.

These two have the ability to deeply and honestly love each other for the rest of their days. As long as they’ve both matured and have worked past their issues; they basically are a near perfect match.

They “get” each other on a spiritual, emotional, and sexual level. They are connected in a way that you would think they are psychically linked. They often know what the other is feeling without even talking.

He could be at work and she could be doing whatever and one will feel that the other needs to talk. They can also feel great love for one another when they are long distance even.

These two are a match that everyone wants. They’re the couple that people say “eww get a room” to. I’m not saying they’re going to get hot and heavy in front of people but they will give off obvious affection that others are inspired by.

They communicate often without using words. They just seem to “know” and don’t have great issues that arise between them. They have much in common, see life in similar ways and have a lot in common.

They never seem to lack fun things to do and they are not typically unsatisfied with one another. They probably have sex on a regular basis if not often. The love is just pure and strong.

What Pisces Man Thinks of Scorpio Woman, Especially In Bed

The Pisces man thinks that his Scorpio woman hung the moon and sprinkled the stars in his sky. Truly he is floored by how amazing she is and he’ll never be able to love another as he loves her.

While young, he may become full of fear and may run from the relationship due to how quickly they fall in love. However, he can recover from this as well as mature in the process.

A matured Pisces will grab onto his Scorpio princess and never let her go. He values her and what she offers him. In the bedroom, there are not typically any complaints to be had.

Scorpio woman is VERY sexual and has no trouble keeping up with the voracious Pisces man appetite. They’re both a little on the kinky side and when they do have sex, they interact on a very spiritual level.

He thinks she’s the most perfect woman on the planet and he’ll do anything for her. He will love her until he dies. This is the woman he has always wanted and asked the universe for.

The Pisces man and Scorpio woman matchup is so amazing that it’s hard to imagine that they don’t have everything they could ever want. No relationship is this perfect. There is always something that will need to be addressed.

So what does this near perfect relationship tend to lack? The Pisces man with Scorpio woman relationship may struggle with trust. That’s the one thing that can make or break them.

Both can be rather secretive and not want to tell each other things that they probably should. In their youth, they’ll really hold back but when they get older, they will tend to open up a bit better.

Scorpio woman doesn’t trust anyone as a rule. Her not trusting her Pisces man isn’t mean to be an insult really, it’s just her natural state of being. Scorpios are born to not trust people.

The more mature she becomes, the more she’ll learn that her Pisces man CAN be trusted. He’ll have to prove it to her over time. Pisces man can seem a bit sketchy sometimes and this makes him look guilty when maybe he isn’t.

He’ll have to put in effort to be honest with his Scorpio woman just as she’ll have to learn to trust and give him the benefit of doubt unless he proves otherwise. He may have a hard time trusting that she will never leave him or love another as well.

This is the one and only huge issue that they may have. As long as they communicate, they can actually work past this. If the love is true and strong, they can absolutely find resolution.

In the event that these two should find that they cannot resolve the lack of trust they have for one another or one decides to foolishly be unfaithful, these two may resort to a break up.

It’s hard to imagine them breaking up their strong love but it can happen. It can also happen when Pisces man isn’t honest with his Scorpio woman about his fears and so she calls him out on it thus causing him to just break it off.

He’ll regret it and she’ll move on eventually. Can they remain friends? The answer is yes, within time and healing, they can absolutely be friends. They will likely be very open with each other as friends.

In fact, they’ll probably talk to each other about why the break occurred and what the feelings where when it happened. While doing this, they also have the ability to get back together if they still feel a tie.

It’s very likely they will always feel this bond no matter if they get back together or not. They’ll always be tied together and other perspective partners may not understand what they have.

This could cause a rift for any future partners either of them has after the break up between them. Other partners are likely to see the friendship as a threat and may display jealous behavior.

More often than not, the Pisces man and Scorpio woman breakup doesn’t last and they end up finding their way back to each other because no one else will love them as they love each other.

The Pisces man and Scorpio woman is quite a match. For these two on a scale of 1 to 10, I give them a very strong 9. They absolutely have what it takes to build a strong bond and make it last.

Any problems these two have, they have the ability to overcome them by simply communicating with each other and being honest. While young, they may have a hard time with this but as they grow and mature, they’ll absolutely learn.

Their love is full of romance, sex, and great dreams for the future. They would also make incredible business partners as well as lovers. As parents, they’ll be extraordinarily loving and nurturing yet strong enough to teach them values as well.

This is an amazing match and they absolutely can build a love that others would give up just about anything for.

If you’re ready to understand more about how compatible are Pisces man and Scorpio woman, check out my brand new Pisces Man and Scorpio Woman Love Compatibility Guide, and if you want to catch him and keep him click here to learn more about Pisces Man Secrets.