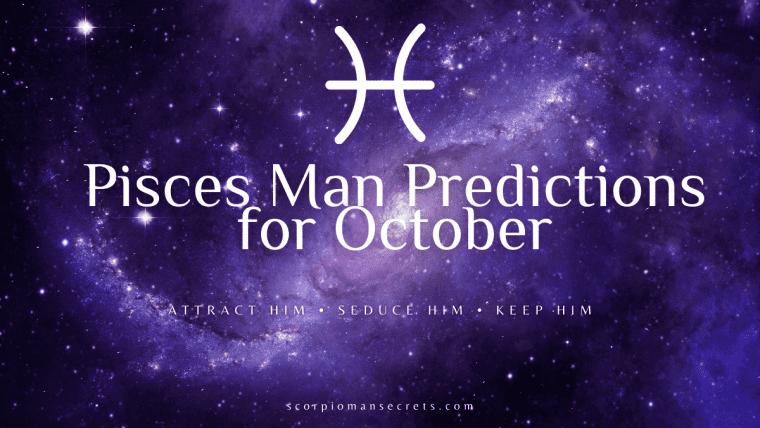 Hello, my sweet readers, how are you? How are all these Retrogrades treating you? I hope you’re not oversleeping and shutting yourself behind closed doors, for I’ve come bearing new tidings of the month ahead! So, strap in, and let’s go on an adventure…

The first week of October marks a pleasant time to spend with a Pisces man. Although he might be more secluded and gloomy at the start of the month, as the days go by, you’ll get a great chance to get to know his inner world more and deeper than ever before.

The second week presents a challenge to the Pisces man’s soft mind; thanks to the Full Moon in Aries and its activation of Jupiter Retrograde and Chiron, the Pisces man will find it hard to deal with his daily life and mundane obligations. Especially if he has some debts. So now is a good time to give some unsolicited advice and help him ground himself in reality.

The third week is excellent for all kinds of romantic and date activities, so make sure to drag him out and go wild. Buy him a house plant, go to a flower shop, feed the swans, or stop by a nice cake shop – show him how beautiful life can be on the outside of the fantasy walls.

Fairies Of Old And High Towers Of Splendor

This is a good time for him to work on his inner child and to heal the romantic traumas from the past. The second half of the first week makes for an excellent chance to get to know his past and to listen to his stories of the olden days from many Moons ago.

This calls for intimate, cozy dinners and quiet suppers that have the potency to lead to something more magical and intimate. This first week is a great time to get a glimpse into his inner world and to listen about his daydreams and fantasies – what made you fall in love with him in the first place.

The Pisces man poses this innocence in him, the purity of heart and high ideals that can only be found in epic tales and fantasy books today. So, in order to get closer to him and find a good way to his heart – make him talk and listen to his stories.

Money Is The Fortune Of The Devil…

When the second week comes, reality will call your Pisces man down to earth, and he’ll be forced to deal with his finances and his diet. If he’s been keeping up a good (healthy) diet, then it’ll be time to take a closer look at his money.

The Full Moon in Aries won’t spare anyone, especially not the Pisces man, as he is more prone to feel the subtle and unseen energies than the rest of the signs. A Full Moon will conjunct Jupiter Retrograde and then Chiron as well, this means that the Pisces man will have to deal with his old wounds tied to his earnings and money in general.

Now is a good time to be there to comfort him, and to hear about his woes. It’s also a great time to give a piece of constructive and productive advice and to call him to his senses when it comes to material things and the ways of the world.

Before we transcend to the 5-D world, we have to deal with the mundane and material, something that falls the hardest on the Pisces man’s shoulders since he prefers to live in his fantasy world.

Now is a good time to showcase your accounting abilities, and to bring some grounding into his mundane life. Just be gentle about it.

First Play And Then Some Serious Work!

The third week brings in more pleasant tides, and the Pisces man is in a very romantic mood. He feels great despite having to deal with his family and home drama.

This transit represents a great point in time to get down and chill – go to an art museum, visit a nearby pond, feed the swans, go swimming, or read the same book together and share your thoughts about it. Think simple, stress-free ways to have fun together.

This week comes like a vacation for the sore mind of the Pisces man, so his mood will lighten and he’ll feel better than he has this entire month. Why not make use of his good mood?

It’s also a great time to help him bring some structure into his daily life and work. So be there for him; at least to listen to him, if not to act as his guide on how to most efficiently arrange his day-to-day life.

This is a very productive time and now is best to go out and about. Don’t let him shut himself in and waste away in his dream world. Force him to be more active and to spring into action more easily.

The fourth and final month brings a nice mood to the Pisces man’s subconsciousness. There’s a powerful New Moon in Scorpio, and this marks a new beginning and a positive shift in his philosophy and approach to life.

If you had an idea that you wanted to pass by him, now is the perfect time (on the 25th)! The doors of his mind are wide open, and his subconsciousness is ready to receive the new seeds of fertility and growth.

If you wanted to shift his attention and gaze onto more productive activities and ideas – now is the perfect time to do it.

It’s also a good time to let the Pisces man show you around spirituality and religious practices he might be into that seem foreign to you. It’s a perfect transit to blend the two of your natures into one unique life growth.

This week is a good time to open yourselves to each other and to share your inner knowledge and secrets. Talking about dreams and their symbolism can prove to be very fertile and productive for your relationship.

October might seem like a not-so-easy month on the Pisces man’s subtle heart, but it’s necessary growth, as simple as that. His mood might not be in the best condition leading up to the Full Moon, but he’ll soon change his tune when the third week’s transits kick in.

The third and fourth weeks present very potent and constructive energies for the Pisces man’s mundane life. Especially if you take it upon yourself to show him the way of navigating the 3-D reality waters.

His mood will become very optimistic and positive towards the end of the month, and his career might even flourish, especially if he gathers the courage to be more public about his inner and intuitive gifts.

I recently wrote an article about a Pisces man’s texting style. You might want to give it a look before November approaches, it’ll help you ease through the challenging periods or misunderstandings. Trust me on this one.