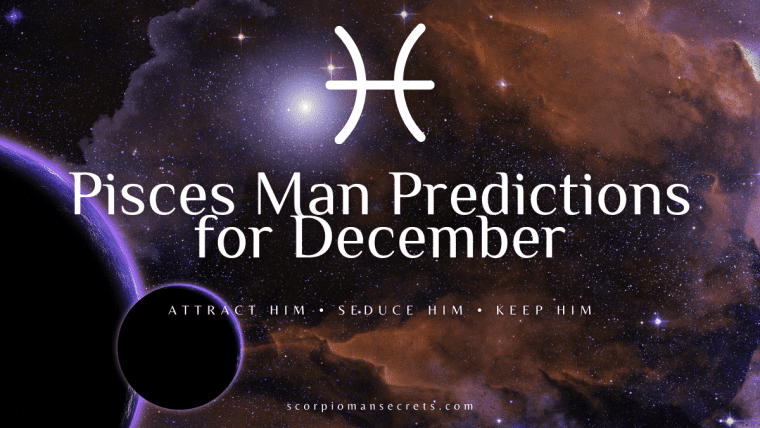 Hello, my lovelies, how are you? I hope you’re not (too) sleepy and tired, for I’ve come bearing the Pisces man’s Horoscope for the last month of 2022. You should not miss out on this! So, strap in, and let’s go diving into his chart together.

The first week of December is great for gift-giving, and for dates that include slow walks around the neighborhood and cozy cafes with a fine wine chart. His focus will be on finances and his commute. It’ll be good if he can avoid driving and walk or cycle more during this week.

The second week will take its toll on him, so make sure you’re there for him either to give him his space or to listen to his woes. It’s very important that you’re empathetic towards him during this week, especially during the first half of it. Keep in mind that he is affected by this lunation more than the other Zodiac signs, so come armed with empathy and compassion for him.

The third week puts the Pisces man in a much better mood than he has been in the past couple of days, and it’s finally your turn to choose the type of date you want to have. It’s also a great time for him to spend some healing time with his friends, with or without you, so make sure to take responsibility for your own preferences and needs, don’t dump it on him.

The final week of December will feature a Super New Moon in Capricorn, which will take place in the Pisces man’s eleventh house of noble causes and social life. This New Moon will prove to be an excellent opportunity to plant the seeds of longevity for your relationship and to find mutual causes that you can work on together that will make better humans out of the both of you. Move bravely forward!

During the first week, the Pisces man’s focus will be on his finances and commute, and siblings. He might be forced to make some sudden payments that, he will find out later, are tied to his family. And he won’t be happy about it.

Later, in the first week, it’ll be a good time to take him out on dates that are close to his home. Walking distance is what I wanted to say; going on a romantic walk from his home to the café or a cozy place you’ve found nearby is a perfect scenario for this time.

It’ll be good for him if he skips out on driving and rather walks or cycles more. This week is also good for communicating through food, cooking, and gift-giving. I know it’s a bit early for holiday gifts, but you make the rules, not the society around you.

So, go on and make your own rules about the gifts, and surprise your Pisces boy with something romantic and hefty. Give him a reason to feel joy during this week, and it’ll do some good for the both of you, so why not?

On the 8th, there’s a Full Moon in Gemini, in his fourth house of domestic affairs, and there might be a conflict between his family life and family’s needs, and his public and professional life. This lunation ought to put him in a not-so-good mood, so it could be a good time for letting him decide whether or not he wants to have ‘extracurricular’ activities.

This could be a good time for sleep. Spending time together in a cozy setting, sleeping, or just staring at the ceiling (romantically, of course) can prove to be an excellent choice of activity at this point in time.

His mental state might be very tense during the first half of this week, so give him plenty of space to unwind and rebound after such an intense Full Moon. Pisces and Cancer are very sensitive to Lunar movements, and it takes much more out of them than from the other signs; having understanding and compassion for them at these “trying times” is important.

You might want to ask him about how he’s feeling and whether he wants to talk about whatever’s eating at him, at this time. Be prepared for a tide of emotions and words to burst out of him, like it’s nothing. I won’t say prepare the tissues for the waterworks, but I will say be mentally prepared to take on his load.

The Tides Are Changing, For The Better

The third of December week gives an accent to his love and social life. This is a good week for him to unwind, relax, and spend some quality time with both his lover or partner and his friends. This is also a good time to have your needs tended to and to voice your wishes and romantic ideas.

This time around, it’s your turn to choose the place for your special date, and it’s your turn to be pampered. Worry not, the Pisces man will have compassion and empathy for you and your needs, but make sure not to put too much of a load on him by demanding all the attention just for yourself.

Going out with his friends, either with you or solo, can be very soothing for his soul right now. It can’t do you harm to meet or spend some time with his friends, but if you find yourself not in the mood for a bigger crowd, then make sure to voice your preferences in order to avoid spoiling his mood.

The Pisces man will appreciate your ability to be both flexible and versatile when it comes to fulfilling your own emotional needs because he won’t feel obliged to read your mind or use telepathy in order to get what you want or don’t want. Keep that in mind during this week, and let him recover properly by being a responsible adult for yourself.

Read also: 3 Things a Pisces Man Wants To Hear From a Woman

Saturn Is The New King; Long Live The King!

The final week of December casts a shining light on his social life. There’s a Super New Moon in Capricorn on the 23rd that will bode well for his love life as well. What this means is that the Pisces man’s love life will finally stabilize. The grounding energies of Capricorn will lead the Pisces man to a realization that he needs more stability and reassurance in his love life.

His friends will also play a big role in this realization, and now will also be a great time for him to either start therapy or change his therapist to a much more grounding and calming person.

This is an excellent opportunity to take your relationship to the next level and to become a more grounding influence in each other’s lives. This New Moon will welcome stability and longevity into your relationship, and you have amazingly fertile energies to work with during this New Moon.

This is a great transit to say goodbye to 2022 and welcome the fresh but demanding energies of 2023 (for the Pisces man). This New Moon is just a prelude to what 2023 will look like, and you should raise your own awareness of where you’re falling short, and where you need to put in more work, sweat, and tears in order to achieve success. May that be social, love, or professional life.

So good luck, stay strong, and may the Force be with you my darlings, you’ve got this!

There you have it, my lovelies, hopefully, you get a better idea of what’s coming this December and how to use it best for your benefit and higher good. The Pisces man’s mood might be unpredictable and gloomy around the Full Moon on the 8th, but afterward, it should be all roses and rainbows.

During the third week, he will be a sort of mirror for you. Whatever he’s reflecting, know that it’s just a reflection of your own inner self, be it that it’s demons or sweet little cherubs. So, be mindful of that…

When the New Moon comes, that’s when the biggest magic is going to happen; be very mindful of what you’re trying to manifest, and don’t be afraid of hard work in order to achieve your dreams.

I sometimes hear from readers that while these Horoscopes are helpful for their romantic lives, they crave more detail and more specificity for them. This is totally understandable, and I have figured out a way to make sure you get all the information that you need to take advantage of transits and to know what pitfalls to avoid.

I’ve created a spot here where you and I can talk personally about your own concerns and how to best create the relationship that you have been waiting for. I love talking to my readers and getting to know them as people – and truly, what have you got to lose? Connect with me here.